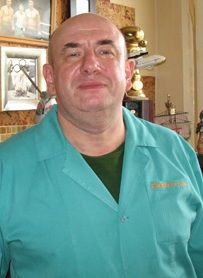 Leskov V.G. is an author of over 30 scientific publications, inter alia – one monograph, 2 methodic recommendations, has one author’s certificate.

Since 1991 Volodymyr Grygorovych works as a doctor of combined team of Ukraine in kickboxing. He used to be a chief physician of European and world cups in kickboxing. He provides consultations and treatment to professional athletes in combat sports, gymnastics and other kinds of sports. He practices diagnostics, treatment and rehabilitation of patients with disorders of locomotion system in professional musicians.

Social activities possess certain place in a life of Leskov V.G. He is a member of specialized scientific council in presentation of dissertations in the SI ITO NAMSU. He participates actively in creation of museum of the history of the Institute.

Volodymyr Grygorovych is single-hearted to his beloved activity. He is held in esteem and has high authority in staff members of the Institute.