The history of the Institute starts in 1919, with the opening of a new institution in Kyiv devoted to treatment of orthopedic patients. Then it was called “The Disabled Child House”.

The history of the Institute starts in 1919, with the opening of a new institution in Kyiv devoted to treatment of orthopedic patients. Then it was called “The Disabled Child House”. Depending on the tasks and directions of scientific activities, the name of the Institute has been changed many times. 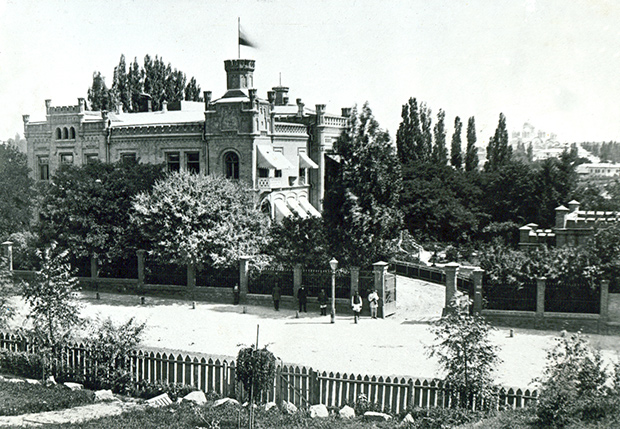 General appearance of the mansion, built at the beginning of 20th Century, occupied by the Institute since 1952. 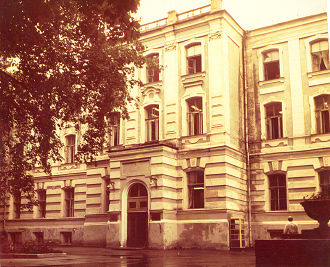 Building of the Institute at 7 Grushevskyi Street (1920th)

At the very beginning of the contemporary Institute’s work and in pre-war period the main scientific studies have been devoted to the bone and joint tuberculosis, congenital and acquired deformations, disorders of locomotion system’s functions in newborns and children to develop efficient methods for prevention and treatment thereof.

Here for the first time the method of surgical treatment of congenital femur dislocation has been developed and applied (A.E. Frumina).

Here a range of reconstructive and recovery operations has been offered for faulty stumps of limbs; a new method for registration of invalids, implemented here, allowed establishing an accurate system for medical surveillance and timely prosthetic treatment (О.О. Bukhtiarov, M.I. Khokhol).

For the first time in the whole country, here the method of anti-bacterial functional treatment has been proposed for patients with bone and joint tuberculosis at the early stages of its development (B.C. Kutsenok, B.K. Babych); as well as methods of arthroplasty in destructive joint disorders (M.K. Panchenko, I.G. Talko, I.P. Vernygora) that in the majority of cases allowed elimination of the pathologic process, improvement of functionality of joint and of a limb as a whole.

The Institute was the first in Ukraine to start the grounded scientific works of problems of hematogenic and traumatic osteomyelitis. On the basis of the Institute, the Republic Center for Osteomyelitis Treatment and for Personnel Training has been founded; it is developing the treatment and preventive measures to improve the quality of treatment, decrease invalidity and cases of death. A great contribution into implementation of treatment and organization measures devoted to this matter has been made by M.K. Panchenko, I.P. Vernygora, G.V. Gayko.

The Institute is holder of priority designs in matters of bone osteosynthesis. The by the Institute proposed metal construction for treatment of bone fractures could reasonably simplify surgical technique, decrease the terms and improve the results of treatment. Also the main rules and requirements to stable fixation of the fractures have been grounded. For the development and implementation of original construction of metal fixing device (“T-beam”) for bone fractures treatment, in year 1952 K.M. Klimov was awarded by the State Award of the USSR.

In year 1968 the Institute was the first in the USSR to open laboratory for cadaver tissues preservation, then reorganized into the Republic Center for Cadaver Tissues Collection and Preservation.

The Institute was the first to develop and implement the method of complex surgical treatment of infectious nonspecific (rheumatoid) polyarthritis. Great contribution to solution of this important and difficult problem has been made by E.T. Skliarenko (awarded as Laureate of the State Award of Ukraine), G.F. Martynenko, I.D. Kincha, E.P. Pashkov, S.I. Gerasymenko. For this reason, they grounded indications and supposed the methods for conservative and surgical treatment of children and adults with this disorder.

In course of many years, the Institute performs scientific study of the problem of degenerative and dystrophic joint disorders. On the grounds of experimental-clinical studies, some aspects of ethio-pathogenesis have been revealed and clinical, X-ray and morphologic classification of degenerative and dystrophic disorders of joints have been offered. Of the grounds thereof, the Institute developed and improved the methods of conservative and surgical treatment depending on the form and state of the disease, localization of pathologic process, age and profession of a patient. A.H. Ozerov, I.V. Shumada, G.V. Gayko, O.I. Rybachuk, I.G. Talko, A.P. Krys-Pugach, O.Y. Suslova, V.I. Stetsula, M.F. Moroz

The Institute widely uses hip joint replacement, and offered recommendations for social rehabilitation of such patients. Development of this problem has been participated in by I.V. Shumada, G.V. Gayko, O.I. Rybachuk, K.I. Katonin, L.P. Kukuruza.

Famous are experimental and theoretical studies of bone tissue reparative regeneration, made by the scientists of the Institute (M.O. Vorobiov, V.P. Zakharzhevskyi, G.L. Emets, V.V. Momblanov, V.I. Stetsula, E.V. Biniashevskyi, A.T. Brusko). Results of these studies lay in the ground of new methods of bone fractures treatment in cases of slow consolidation and pseudoarthroses of different localizations.

In the 80th member of the Institute, jointly with “Osteosynthesis” Association developed a set of metal fixation and tools for stable-functional osteosynthesis, one- and bipolar hip joint prostheses, launched serial manufacture thereof and widely implemented them into practice of medical institution of Ukraine (V.B. Levytskyi, L.M. Ankin, O.I. Rybalchuk, K.I. Katonin, L.P. Kukuruza, G. V. Gayko, A.P. Krys-Pugach). Resolution of this problem increased scientific and technical level of profession and allowed reasonable increase in results of treatment of injuries and diseases of locomotion system.

At the end of the 70th, the Institute started to develop the new direction to apply microsurgery technique for treatment of patients with severe consequences of traumas and orthopedic diseases. The range of new operations have been theoretically grounded and proposed – transplantation of peripheral nerves, transplantation of bone auto-grafts and joints on vascular pedicle, transplantation of muscles, treatment of ischemic contractures of extremities (I.G. Antoniuk, V.I. Gayovych, A.P. Liabakh, S.S. Strafun, I.M. Kurinnyi).

One of the important spheres of orthopedics being studied by the Institute’s scientists for many years is the spine pathology. The studies being performed allowed to recover some matters of ethio-pathogenesis of scoliotic disease, offer methods of treatment thereof by spine fixation and thoracoplastics (A.E. Frumina, G.T. Lykhvar). Moreover, thenew methodshave been developed and improved for surgical correction of complex deformations of spine with funnel and keeled deformations of chest (V.Y. Fischenko).

In year 1984 on the basis of Spine surgery clinic the Republic Vertebral (Spinal) Center has been established and started to perform different types of decompression operations of spine and spine cord using microsurgery technique. The method of shortening vertebrotomy has been also developed (V.Y. Fischenko, V.A. Uleschenko, M.M. Vovk, A.T. Stashkevich).

Extremely important for effective treatment of orthopedic and trauma patients is proper application of rehabilitation measures. This matter has been paid reasonable attention at the entire stages of development of the Institute (O.O. Putylova, V.S. Shargorodskyi, I.V. Roy).

Staff members of the Institute, jointly with the scientific society “Vidguk” (headed by S.P. Sitko) are the founders of a new direction of scientific studies with the use of microwave resonance therapy of aseptic necrosis of femoral head in children and adults, cerebral spastic paralysis, osteomyelitis (I.G. Gayko, I.V. Shumada, G.V. Gayko, E.V. Biniashevskyi, G.I. Ovchynnikov).

Staff members of the Institute play reasonable role in studying traumatism in agriculture, in range of spheres of the industry and in road accidents as well as in development of prevention measures.

According to the results of scientific and information studies at the current stage of the development of modern orthopedic and traumatology science, the most utmost and prospective directions of scientific studies have been established. They are: the problems of osteoporosis, reparative osteogenesis, traumas and consequences thereof, pathologies of joints and spine, preservation of the genetic fundof Ukraine, sectorial programs of medical and social rehabilitation of disabled after injuries and diseases of locomotion system.

It was considered proper to precede with study of the methods of early diagnostics and treatment of congenital and acquired deformations of locomotion system in children, degenerative and dystrophic disorders of joints in age aspect, methods of prevention and treatment of purulent diseases of bones and joints, study of medico-social aspects of injuries of locomotion system and consequences thereof, development and implementation of new constructions and technologies of big joint replacement.

To solve these problems, the Institute has reasonable laboratory-experimental and clinical research and development base.

Scientific-experimental base of the Institute is nowadays represented by: department of patho-morphology with experimental-biologic department (vivarium); laboratories of immunology; biochemistry; microbiology and chemotherapy; center for blood collection and cadaver tissues preservation.

All laboratory departments have modern high-technology methods for laboratory studies.

Clinical and scientific basis of the Institute is formed by the department of purulo-necrotic infection, traumatology and orthopedics of adults, diseases of joints in adults, traumatology and orthopedics of children, surgery of spine with Republic (neurosurgery) center, diseases of joints in children and adolescents, foot and complex prosthetic treatment, microsurgery and reconstructive surgery of hand, rehabilitation and functional diagnostics with group of manual therapy, sport and ballet trauma, consultative polyclinic department. Clinical subdivisions are equipped by high-tech diagnostic and treatment machinery, have modern operation blocks.

For implementation of scientific achievements in the sphere of orthopedic and traumatology extremely important is participation of staff members in work of congresses, meetings, conferences and seminars. The Institute annually publishes several monographs, thematic bibliographic packages and bibliographic indexes of scientific works by the Institute’s members. On the basis of the institute the scientific and practical journal “Reporter of Orthopedics, Traumatology and Prosthetic Treatment” is published.

For popularization of scientific researches of the Institute, newspapers, radio and TV are widely used. Scientific, practical and innovative activities of the Institute was many times represented at international exhibitions and at Permanent Exhibition Center of National Economics of Ukraine, and on two web-sites. The Institute has specialized Scientific council for accepting presentations of candidate and doctor dissertations. Efficient are city and regional scientific societies that negotiate all the matters relating to orthopedics and traumatology, coordinate scientific studies and treatment and prevention activities of local institutions.

Since 1938 according to the Decree of the Healthcare Ministry of Ukraine the Institute has been approved to be the clinical basis of Kyiv Medical Institute.