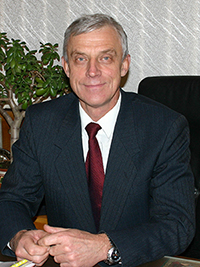 Member of international medical societies SICOT and ISMISS, representative of the best surgery school, who made a great contribution into decision of spine and thoracic diseases and traumas.

Anatiolii Trokhymovych was born on January 4, 1955 in Budolioubivka village in Ovruch district of Zhytomyr region. In year 1974 he entered M.I. Pirogov Medical Institute of Vinnytsia, and after graduation spent two years (1980-1981) for internship study of surgery. This surgeon and future famous Ukrainian scientists started his labor activities in his motherland, in Ivankiv central regional hospital. Later he worked as neurosurgeon in city clinical hospital of Kyiv (1982-1989). In year 1988 has successfully represented his candidate research. During the period from 1989 to 2003 he worked as senior research. In this period, he made and represented his doctor research (1997). Later he occupied the position of the senior scientific researcher of the Spine Surgery Clinic at Republic Spine Center (neurosurgery) of Kyiv R&D Institute of Traumatology and Orthopedics by the Healthcare Ministry of Ukraine (2003-2006), and later he became the leading scientific researcher of the Institute of Traumatology and Orthopedics by NAMSU (2006-2007) – on of the best and leading centers in the sphere.

In year 2007 Anatolii Trokhymovych became professor and headed the Department for Spine Surgery of the Republic Spinal (Neurosurgery) Center of the SI “The Institute of Traumatology and Orthopedics by NAMSU”. The sphere of his professional interests includes development and improvement of modern methods of conservative and surgical treatment of diseases and consequences of trauma injuries of spine, as well as congenital deformities of thorax. His works over new methods of treatment scoliosis, spine osteochondrosis and other diseases.

Among the achievements of Prof. Shashkevych are over 100 published scientific works, 3 monographs, 10 inventions, 8 rationalization proposals, which are successfully implemented and highly estimated by professional society. Anatolii Trokhymovych spends a lot of time and efforts for training new generation of scientists-surgeons, whom he considers to be his associates and followers. Under his supervision there were made and presented 4 candidate dissertations. A.T. Shashkevych is also engaged into public activities. His is a member of editor boards of journals “Spine Surgery”, “The Messenger of Orthopedics, Traumatology and Prosthetic Treatment”.