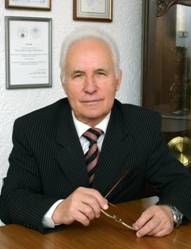 Gayko G.V. is the author of 372 scientific works, including 8 monographs, 9 manuals, 10 reference books, 11 patents for useful model, 30 methodical recommendations and information letters. Under his supervision 8 doctors and 14 candidates of medical sciences have been prepared.

Gayko Georgii Vasylovych, born in 1936, Academician of the National Academy of Medical Sciences of Ukraine, elected on May 23, 2012; scientific direction – “Orthopedics and Traumatology”, dr hab.med. (since 1985), professor (since 1992), meritorious figure of science and technique of Ukraine (since 1995), laureate of the State Award of Ukraine in the sphere of science and technique (since 1996), director of SI “The Institute of Traumatology and Orthopedics by NAMSU” (1989-2019), orthopedist-traumatologist of highest category, director of the Clinic for Orthopedics and Traumatology of Adults at the Institute. Passed trainings in clinics of the USA, Germany, Bulgaria, Hungary, Poland.

G.V. Gayko is a famous scientist in the sphere of traumatology and orthopedics, establisher of specialized orthopedic-traumatology service in Ukraine.

With his innovational studies, he proposed a range of original methods and technologies of reconstructive-recovery surgical interventions in patients with poliomyelitis and hematogenic osteomyelitis in children and adolescents. He defined the causes of developing consequences of hematogenic osteomyelitis connected with direct impact of purulent and inflammation processes on tissues, growth disorders and formation of joint ends of limbs, development of modern methods of prevention and treatment thereof.

By his studies, Georgii Vasylovych made a great contribution into development of theoretical and practical issues of arthroplasty interventions into big joints, including joint replacement. He received original experimental and clinical details relating to functional transformation of bones, course of reparative regeneration after use of autogenic and allogeneic bone-articular implants, stable-functional Osteosynthesis in fractures and reconstructive-recover operations.

Widely known are his scientific studies of the matter of congenital femur dislocation, congenital and acquired deformation of locomotion system, degenerative-dystrophic disorders of bones and joints, organization of orthopedic and traumatology service of our country.

For the study “Development and Implementation into Medical Practice the Reconstructive-Recovery Operations of Bog Joints due to Damages and Orthopedic Diseases”, pursuant to the Decree of the President he has been awarded by honorary title of the Laureate of the State Award of Ukraine in the sphere of Science and Technique.

Gayko G.V. is the author of 372 scientific works, including 8 monographs, 9 manuals, 10 reference books, 10 inventions, 11 patents for useful model, 30 methodical recommendations and information letters. Under his supervision 8 doctors and 14 candidates of medical sciences have been prepared.

For achievements in practical, scientific and public activities, G.V. Gayko has been awarded by 3rd grade “Order of Merit”, sign “Excellent in Healthcare”, insignias “Veteran of Labor”, “In Honor of 1500 years of Kyiv”, honorary certificates by Verkhovna Rada of Ukraine, Cabinet of Ministers of Ukraine, and Healthcare Ministry of Ukraine. European Academy of Natural Sciences awarded him with the order “Mykola Pyrogov” for successful scientific and practical work in the sphere of medicine.