(Chief of the Department for Joint Diseases in Adults) 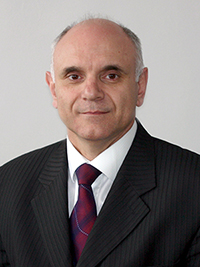 Chief of the Department for Joint Diseases in Adults

Deputy Director in charge of Scientific and Medical Work

Graduated from O.O.Bogomolets Medical Institute of Kyiv. Since 1975 he worked in Kyiv Research and Development Institute of Orthopedics. From 1983 to 1994 he held the positions of inspector, department chief, deputy chief of the Central Department of Educational Institutions, Staff and Science of the Healthcare Ministry of Ukraine, and simultaneously – at the Institute of Traumatology and Orthopedics by the O.O. Bogomolets National Medical University of Kyiv. Since 1994 he works as deputy director in charge of scientific and medical work. Since 1999 he holds the position of Chief of the Department for Joint Diseases of Adults at the Institute of Traumatology and Orthopedics by NAMS of Ukraine. Presented researches for candidate (1982) and doctor (1997) scientific degrees.

He is the author of 200 scientific works, among them 2 monographs devoted to matters of modern arthrology and rheumatologic orthopedics, problems of deforming arthritis, rheumatoid polyarthritis; supervised scientific researches for one doctor and 4 candidates.

Regenerative technologies in traumatology and orthopedics